Confidence is the need of the hour

The Congress decision to finally create a separate Telangana state is welcome.But it seems to have been taken in a hurry.The Congress High Command has not prepared the Seemandhra leaders in this regard. Even the Congress MPs and Ministers of either region have no clue.Now the Seemandhra region is on the boil and the leaders are not in a position to face it.

Nevertheless, it is necessary for the people in that part of the State to restrain themselves in registering their protests which should be done in a democratic way.
The Centre should also take special responsibility immediately to create confidence among the people of both the regions.
They just can't make some announcements on the division of the State and keep quiet.
Immediate efforts should be made at the highest authoritative level to dispel genuine doubts of the affected people regarding location of the capital, funds allotment, water distribution, etc. A government-level mechanism has to be set up for this pur pose. Let the MPs, MLAs, Ministers and leaders of all parties come out and tell the people about their plan of action. Mere resignations will not serve the purpose. At the same time, let there be clarity on Hyderabad as joint capital and its operation.
Our State leaders, irrespective of their party affiliations, need to learn, at least now, from the leaders of neighbouring States like Tamil Nadu, Karnataka and Maharashtra. In spite of their political differences, they get united when they have to fight with the Central Government on issues that benefit the people in their respective States. They show immense solidarity and strength for effective bargain. It is a pity that similar unity is lacking among our leaders. 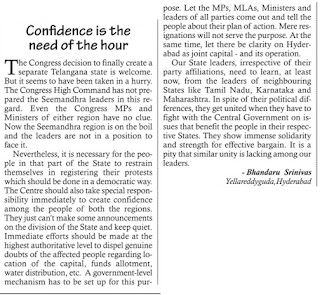