My experiences in America - 1 – Bhandaru Srinivasarao

My experiences in America - 1   – Bhandaru Srinivasarao


It was a bright and sunny morning when we left Seattle to spend some time on the Oregon coast. We took the Interstate #5 and traffic was light on account of it being a week day. I have seen the Pacific Ocean a while ago when I visited the US back in 2003. It was in sunny California and I longed to see the ocean once more.

The trip was uneventful until we approached the coastline. The entire scenery transformed in front of our eyes. On one side is the largest ocean in the World. On the other side is a road that meanders along the coast offering scenic vistas everywhere we look. As the road races along with coast, the vast ocean played hide and seek with us. It took almost six hours from Seattle to reach the Depoe Bay resort in Oregon State.

The vacation home which was booked online is a sprawling mansion with five bed rooms, self contained kitchen etc. There was no one at the vacation home to greet us. Based on the instructions given to us, we searched for a lock box near the garage, entered a code number and lo behold – we had the keys. We parked the car in the garage and were pleasantly surprised to see how homely the house was. It was neat and tidy. The kitchen was well stocked and the bedrooms were spacious with plenty of linens to spare. 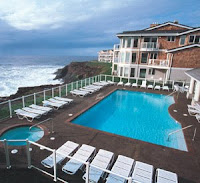 A home away from home
We had a pleasant surprise with the jetted tub on the upper floor patio. After spending two hours in the hot tub, we were relieved of the travel strain. It was a memorable experience to sit in the gushing waters as the warm water jets gently massaged the sore muscles. Renewed and replenished, we set off for a quick walk to the Depoe Bay viewpoint which was one block away from our vacation home.

I have studied in my childhood that the Pacific is the most peaceful among all oceans. But I was amused when I saw a notice board warning – “Don’t cross this line. There is every possibility of sudden waves engulfing the shore”. I was told that authorities are putting up such caution signs in the back drop of tsunamis which devastated South East Asia in 2004.

A whale figurine
There were other coastal cities nearby – Florence, Newport and Lincoln City. We went round all these areas during our stay. We spent a lot of time in the Oregon state aquarium. The underwater aquarium featured sharks, dolphins and other exotic sea animals and we enjoyed watching them at close distance. 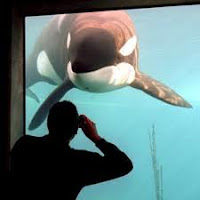 Real One
The special affect at the aquarium was the giant anaconda – a beautiful 12 foot anaconda that was, thankfully in an unbreakable glass enclosure. 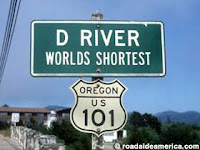 At Lincoln City, we came across another surprise. Good things come in small packages is a cliché we heard a lot of times. And it proved true when we saw the World’s shortest river. It was amusing to watch World’s shortest river joining the world’s largest ocean that is Pacific. The river’s length is just 440 feet and it originates in a small forest across the road adjoining the ocean. 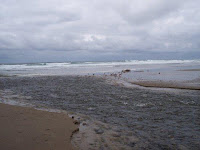 Small and Big meeting together
Another interesting observation worth noting is that we can actually witness the differences in temperatures between the river and the ocean. The river was shallow and warm while the ocean was deep and cold.
We then headed down the coast to go visit Cannon Beach near the city of Seaside. The beach is famous for the Haystack rock that is a big rock close to the coast. Generally the rock is surrounded by sea waters. We got lucky since due to the low tides, the waters around the rock receded enough for us to walk right to its base. The Haystack rock is used as a preservation point for seagulls and other sea birds. We could see hundreds of birds perched on the rock.

There were hundreds of tourists on the beach enjoying the beach with their families. Children were busy either flying kites or making sand castles. After spending some time on the beach and taking some pictures, we commenced our journey back to Seattle.