The Hindu JP for constructive journalismSPECIAL CORRESPONDENTSHARE • PRINT • T+ Journalism is a glorious profession that inspires people when scribes write analytical pieces with constructive criticism and helps society, said Lok Satta Party president and MLA Dr. Jayaprakash Narayan.
At a function organised by the Turaga Foundation, he addressed the gathering after giving away an award of excellence instituted in the name of Late Turaga Krishnamohan Rao, journalist and writer, to senior journalist Bhandaru Srinivasa Rao. Mr. Narayan said while the print media had been steadfast in the discharge of its duties and AIR had always played a constructive role, the television channels had a lot to improve. Except in times of political emergencies or during natural calamities, when he admitted to watching television, he said the content left much to be desired. Acknowledging the recognition, Mr. Srinivasa Rao said it was not an award but one that he considered a reward given to him in the name of one of his favourite humorous writers, Turaga Krishnamohan Rao.
Award of excellence instituted in the name of Late Turaga Krishnamohan Rao given away to Bhandaru Srinivasa Rao, a senior journalist who worked for the All India Radio 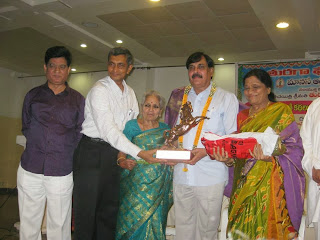