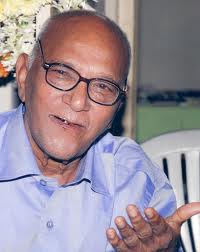 I deeply condole the demise of my mentor Mr.D.Sitaram who shaped many hands in UNI-Hyderabad with martinet discipline and drill in my early 1980.He was a stalwart in the galaxy of UNI hierarchy. I owe a lot to him in particular for what I am now after serving the news agency for over 30 years.

In our circle, we call him DS. He had the rare quality of picking up the right talent in the organisation which contributed to its growth and golden era of news agency journalism unlike the current management.

We had learnt from him the art of collecting news from different sources and disseminating the items with accuracy, brevity and fastness, which was the motto of UNI.

We were always kept on the run for stories and mind you, there was no Fax, STD,Mobile phone or Internet connections those days and yet UNI was faster, thanks to his drive.

DS used to dance his fingers on the type writer key board to file a story before it was given to the teleprinter operator for disseminating the news through terrestrial cable network to compete with the rivals.

We had learnt from him he technique of typing the any story with high speed as dictated by the reporter from the spot over telephone.I do remember he had typed the story of the then PM Indira Gandhi dedicating the Srisailam Dam when I dictated the item from the spot through "lightning call"(No STD even those days) in early 1980's.

While working as the manager of UNI-Hyd, he used to run a popular column under his pen name "Di Yes" in the Deccan Chronicle daily. He was responsible for getting UNI's own building after the office was run in a ramshackle Fatehmaidan stadium for several years.

May his soul rest in peace.I convey my heart felt condolences to the bereaved family.﻿
-Dr.Y.Bala Murali Krishna