Will caste-conflict engulf state Cong?
Will war-of-nerves between two Congress strong-men of most politically volatile Guntur district turn into an ‘ugly’ caste-war?  This fear is engulfing slowly, but steadily the state Congress party, ever since senior Congress leader and party MP Rayapati Sambasiva Rao lambasted his bete noir and member of Rosaiah’s Cabinet Kanna Lakshminarayana.

Last week.Rao indeed stirs a hornet’s nest by leveling serious ‘corruption’ charges against his bete noir.  He even described him to ‘Madhu Koda” whom today nicknamed to ‘corrupt politicians’.  While Rao’s anguish is understandable as it come out of frustration for not getting due recognition to his contributions to the party, yet the timing clearly sounds , dangerous to the party.
Not that the Rao-Kanna clash is new in Congress party.  They remained arch rivals in their bid to claim one up-man ship in the district politics.  They clashed even while staking claim for Mayoral post of Guntur Municipal Corporation and ultimately settled for sharing power.  But, the frustration that crept into Rao as he is not being considered either for a Cabinet berth in Union Cabinet, or any other plus post offered to him, though he had got elected for the fifth time.  To his dismay, Kanna, who joined the party much later and enjoyed all the powers in state politics, is what perhaps annoyed Rao.  Apart from Kanna, yet another late comer to the party like Purandheswari too getting due recognition as she happens to be the daughter of founder-president of Telugu Desam Party, late N.T.Rama Rao, indeed apparently added to Rao’s frustration.
Ironically, Rao, a known business tycoon in south coastal Andhra from ages, had got an opportunity to serve a plum post of Chairman of 20-point Economic Programme, with cabinet rank,  during Rajiv Gandhi’s tenure as Prime Minister.  Except for the brief post, he never ever been considered either in the Cabinet or given important role to play in state politics.
Political analysts feel that it was the ‘caste’ consideration which restrained the party high command to overlook Rao. They argue that since Kanna, belongs to most powerful and influential Kapu community, had been given more importance due to political compulsions. 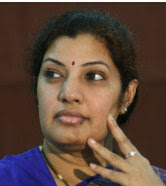 As far as Purandheswari, who belongs to Rao’s “Kamma” community, obviously got berth in union ministry, simply because she happened to be daughter of TDP founder president?
Thus far, the political observers of the firm opinion that the party successfully could strike a balance by ensuring the majority “Kapu” community not being swept away by the emergence of PRP of Chiranjeevi.  Though very few of the party members belonging to that community crossed over to PRP from Congress and Telugu Desam just before the last polls like Veda Vyas (Cong),Krishna, Kottapalli Subbarayudu (TDP), West Godavari, who was also Minister in Chandrababu cabinet and K.Kala Venkatarao(TDP), Srikakulam),but  other ruling party leaders like Kanna Lakshminarayana and Ambati  Rambabu remained in the party helped party win maximum number of seats in Guntur  district, which accounts for  18 MLAs and 3 MPs.
Not that the caste conflict confines only to the Congress party.  Similar skirmishes one do witness quite often in the main Opposition Telugu Desam party.  The Kamma-Kapu differences were skin deep and also reflect in body politics.
In that backdrop, many a political observer chose to dismiss the Rao-Kanna clash is yet another similar  short fights  and feel it will no way have its bearing on the future voting pattern. However, if the party high command failed to take not of this serious clash and take appropriate ‘damage control’ measures, many fear PRP may derive maximum benefit of this ‘caste conflict.’
Whether it will blows over or engulf the party to cause considerable damage to its vote bank in coastal Andhra, only time will tell.   - BHANDARU SRINIVASRAO    (12-05-2010)