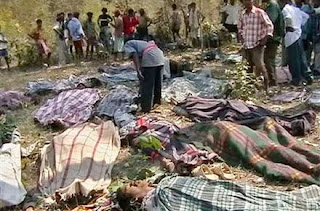 The unabated violence unleashed by the ‘reds’ (left wing extremists) yet again claimed 50 lives, including 12 cops, when they blew a bus triggering an improvised explosive device (IED) near Danttenwada in Chattisgarh. This comes close on the heels just over a month after the Maoists gunned down 76 CRPF jawans in Chintalnar and a visibly panicked Union Home Minister P Chidambaram feels he has a limited mandate and seek for more to tackle the naxal menace.

Who is responsible for fresh spurt of naxal violence? I feel the government as well the left-wing extremists groups was equally responsible. If I wish to blame the ‘reds’ for their indiscriminate and senseless killings of innocents, then the Centre for not addressing the issue in right perspective and using brute force, which only prove counter-productive. The Centre’s decision to weed out Maoists from their hideouts spread over in 5-7 states, including West Bengal, Bihar, Orissa and Chattisgarh, besides Andhra Pradesh by forming “Green hunt” was undoubtedly a provocative move to push the Maoists to wall and carry out counter-attacks. As a result, one could witness fresh spurt in their violence.

Can a brute force help put an end to left-wing extremist violence? What’s the root cause for Maoists spread and their menace? Should one construe it as a mere ‘law and order’ problem as did by our learned Union Home Minister P Chidambaram, or a ‘socio economic problem’ which was the view point of former Andhra Pradesh Chief Minister Dr Y S Rajasekhara Reddy?

Andhra Pradesh too was a victim of naxal menace for more than two decades. Successive governments viewed it differently. If the TDP founder-president N T Rama Rao initially put forth an argument that naxals were true patriots, he was quick to realize he made a mistake and deal with them firmly. His government had also raised elite “Greyhounds” And, as a result, his party lost the 1989 elections. The Congress government, which took over the resins under the leadership of Dr M Chenna Reddy, viewed it differently. He said ‘naxal menace’ was not a mere law and order problem, but a ‘socio-economic’ factor. He was the first Congress Chief Minister to take the initiative to prepare the road map for overall economic development, especially in inaccessible villages by improving communication net work, under the Remote Areas Development Scheme (RADS). But, his short stint as Chief Minister ended quickly and was replaced by N Janardhan Reddy, who had to impose a ‘blanket ban’ on naxals, following the assassination of Rajiv Gandhi by LTTE in at Sriperumbadur during an election campaign in Tamil Nadu. What prompted Reddy to draw such a parallel between LTTE and Maoists may be a difficult question to answer.

The successive Telugu Desam government continued the ban as a result of America’s decision to include Indian Maoists in dreaded list of terrorists outfits world over after the 9/11 attacks in that country. But, it was the Congress Chief Minister Y S Rajasekhara Reddy, who saw his party bounce back to power in 2004, declared that his government hereafter view the Maoists issue as a ‘socio economic’ problem and hence decided to hold talks with left-wing groups to identify the core issues that they chose to confront as government’s failure.

Though the talks apparently failed and the determined YSR government took the initiative to implement host of developmental schemes, including that of disbursement of surplus land to landless poor and several economic doles such as ‘Pavala vaddi” to benefit the Self-Help Women Groups, old age pensions to rural poor, employment guarantee scheme for unemployed rural youth, besides his mighty Rs One thousand lakh crore ‘Jala Yagnam” to build more than two dozen major and minor irrigation projects. Thus, YSR government neutralized the Maoists propaganda of anti-poor policies as majority of these schemes were meant to target those BPL groups.

Simultaneously, the YSR government had also given ‘free hand’ to state police to tackle senseless naxal violence and intensified anti-Maoists propaganda systematically whenever they tried to stall government sponsored development activities. As a result, the police could accomplish success after success in not only eliminating several top Maoists leaders and strategists responsible for innocent killings and destruction of government properties, but also silenced the so called ‘human rights’ activists from dare not hold ‘briefs’ for the Maoists. The state police could also successfully unearth huge arms dumps in forest tracks where the Maoists were active, and broke their backs by seizing their arms manufacturing units in Tamil Nadu and elsewhere.

Andhra Police never faced such huge successes and even received accolades from the then Centre (UPA-1 government) for putting down left-wing extremist senseless violence. YSR’s first five years proved glorious as his government could drive the naxals out of its state peripheries.

Driven out naxals from Andhra could find havens in the neighboring small states creating nightmares to governments in power. Ironically, the Centre too faulted for viewing the growing left-wing extremists violence spread to newer states as law and order problem and made mockery by issuing ‘alarming statements’ by the Union Home Ministry is that the Maoists trying to overthrow the Union government by 2020. It did not stop there. It declared launch of ‘Operation Green Hunt’ by extending central para-military forces logistical support to those states which are facing naxal violence.

With that backdrop, the Union Home Minister decision to seek bigger mandate to tackle Maoists menace, not only sounds ‘funny’ but also ‘ridiculous’. Being a seasoned politician, he should have realized his mistake of using force against Maoists proves only counter-productive and instead of taken a leaf out of “YSR mantra” – dual attack to tackle the menace by initiating development schemes aggressively and effectively (though they may not be 100 per cent successful in implimentation) and also deal firmly if the Maoists indulge in senseless violence. To me, the naxal menace is growing in some of those states like Orissa and Chattisgarh due to huge mineral wealth. If the Maoists in Andhra spearheaded their struggle on ‘land to tiller’ slogan, then in these states they could successfully convince the major tribal population in these two states forest tracks to protect their mineral wealth.

Shouldn’t Chidambaram, instead of seeking bigger mandate like using aerial power to crush naxal hideouts, address the fundamental issue like socio-economic backgrounds of people living in these states? Is it not the responsibility of the parties in power to redress the people’s problem instead of looking for un-audited Central funds to fight the left-wing extremism in their home turfs?

Is not time for the Centre and Chidambara, besides the concerned state governments which were ruffled with naxal menace to realize the ground realities and follow the Andhra pattern, which proved ‘successful?