Media’s new ‘Bhasmasura Hastam’
-bhandaru srinivasrao
I don’t know  what to say when a friend of mine asked about the new initiative of a regional channel to expose ‘black sheep’ within the media. The new regional channel ‘ABN” of a vernacular daily ‘Andhra Jyoti’ last week had put out two news reports involving a media chief as well a rival channel reporter’s allegedly involvement in graft.

And the ABN and Andhra Jyoti promoter proudly announced that they have decided to ‘expose’ the black-sheep within the media, who bring ‘bad’ name to the profession. 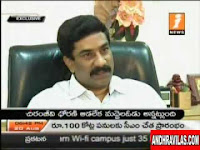 Well, as an ‘active’ or ‘practicing’ journalist, I personally welcome the move.  But, at the same time express my fears that such a move may pose serious threat to the very existence of the profession.  As it is the people have started losing their faith in all systems that exist in a big democracy like ours.  Legislature and Executive are always under attack.  That the people have lost their faith in them is no big news.  Though, the faith and confidence on the other Constitutional wings like judiciary and fourth estate strained a little, but not totally lost of their importance, now may too become a reality.
If the judiciary is fighting its back against the wall with the Legislature determined to bring them under scanner and made accountable and answerable to all their off-the-court activities, then the initiative of ABN indeed may blow the lid off media per se in Andhra Pradesh, at least.  The clarification that the promoter of the newspaper and news channel had reasoned saying ‘it’s time to introspect for media colleagues over their actions’, too acceptable and appreciable.  But, my worst fear lies how the rest of the media friends takes it.
More than three decades back, when I decided to take up the profession, it was considered as most ‘pious’ and ‘respectable’.  Yes, today it is no more.  One of the reasons may be for every growing competition with A to Z news channels and of similar kind of news papers.  As a result, the ‘good journalism’ had taken a back seat with ‘sensationalism’ taking the front.  Whether the ‘sensationalism’ is for ‘benefit for largesse’ or TRP ratings in case of TV channels, is debatable.
My senior colleagues in print media blame the electronic media, especially the regional television channels, responsible for promoting unhealthy competition.  That may be again ‘true’ or ‘false’ as I wish not get into unnecessary controversies.  More so, as I belong to the electronic media as I although associated with the government controlled All-India Radio and Doordarshan.

Though, towards the fag-end of my career, the two were brought under the banner of Prasar Bharati and provided ‘autonomy’ to function independently, yet we continue to function with same ‘fairness’ as we did when were under the government control.  Thus far, were far off from ‘sensationalism’ to say the least.
Having analysed the persisting problem that rocked the media, I  see two clear reasons for either media owners or its work force indulge in accepting (or demanding) graft.  In the recent past, perhaps, every one of us heard of how the ‘paid articles’ controversies during the recent elections made big news.  Ironically, those who involved in these ‘paid articles’ or ‘paid time slots’ (in case of so called 24 x 7 news channels), are indeed big wigs.  Some of the national dailies names too figure in this.  That the issue was later nipped into bud is another story.
In that backdrop, I feel justified, when the ABN boasts of exposing a Telugu daily promoter caught in ‘tapes’ for demanding bribe from a self-styled Kaleshwar Swamy of Penugonda in Anantapur, or a Telugu channel reporter in another episode in West Godavari.  Exactly, what I fear seems happening now!
Today, ABN and Andhra Jyoti may be justified in calling for ‘introspection’ among their own colleagues.  Will the daily and channel promoter accept there are no ‘black sheep’ in their own workforce?
Though, I would not like to give unsolicited advice to my media colleagues, yet I wish to say that we apparently using our own colleagues for our future ruins.  Yes, like ‘Bhasmasura’ in one of mythological epics using his own ‘hand!’
---
(25-04-2010)